Traders of volatility derivatives -- futures, options, or exchange-traded funds and notes -- often wonder why the VIX, or the Chicago Board Options Exchange Market Volatility Index, moves much more violently than do the derivative contracts that are based on it.

This particularly vexes derivative holders when the market plunges and the VIX (which rises as fear grows) climbs by far more than the futures do. I use the futures as a measuring stick, because the prices of the others -- options, ETFs, ETNs -- are based on the futures' prices.

Such differences prompt complaints about futures traders: "Why are they keeping the futures so low? Are they predicting a decrease in volatility? They must be crazy!"

But the discrepancy has nothing to do with the traders' opinions. Rather, it reflects a simple reality: The VIX and VIX futures don't have identical components.

Yes, the prices of both reflect the implied volatilities of SPX options, which are based on the S&P 500. But the VIX is a 30-day volatility estimate, using the two nearest-term strips of SPX options. On Aug. 8, it was a weighted calculation of the August and September SPX options. 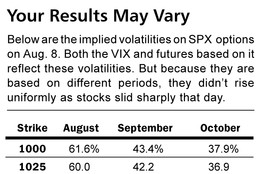 The table nearby shows the implied volatilities of certain SPX options at the close of trading on Aug. 8. On that day, many traders were buying SPX puts, mostly August short-term options, for which they were willing to pay dearly. Those purchasing September options were paying far less. And October buyers were paying even less.

The out-of-the-money August SPX options' high volatility clearly influenced the price of the VIX. However, those options don't figure in the calculation of either the August or September VIX futures. Instead, the August futures (priced at $36.55) combined the implied volatilities listed under September in the table. And the September futures (priced at $30.20), reflected the volatilities listed under October. The price of the VIX itself ($48) reflected both the August and September columns.

Upshot: If you were long the VIX futures or the calls, you didn't come close to realizing profits commensurate with the big move in the VIX.

Eventually, at expiration, the VIX and its near-term futures converge in price. But anyone who expected them to move in lock step while the stock market was tanking on Aug. 8 was very mistaken.