The process by which a seller (or writer) of an option is notified that he is being required to fulfill his obligation to sell stock (call assignment) or buy stock (put assignment).

A spread which makes money if the underlying stock or future declines in price. Typically constructed by buying puts at one strike and selling a like number of puts with a lower strike.

The point at which a strategy or position would neither make nor lose money (generally, at the option's expiration date).

A spread which makes money if the underlying stock or future rises in price. Typically, one would buy calls at a certain strike and sell the same number of calls at a higher strike.

A spread in which one sells options at one strike and buys options at a longer maturity with the same striking price. In a neutral calendar spread, one would not necessarily buy and sell the same quantity of options. The spread may be constructed with either puts or calls, but they are not mixed; that is, if one buys calls, he also sells calls to complete the spread -- puts would not be involved in that case.

An option or future that settles for cash at its expiration date, rather than being converted into stock or a physical commodity.

The loan value of marginable securities; generally used to finance the writing of naked options.

One who thinks that the popular opinion of the masses is wrong, and will therefore go against that opinion. If everyone is bullish, the contrarian will interpret that as a sell signal.

1) to buy back an option that was written; 2) to sell an option against an existing position in the underlying stock or futures.

A written option is considered covered if the investor has an offsetting position in the underlying security. Written calls are covered by long stock; written puts are covered by short stock.

Typically meant to denote the strategy in which one is long the stock or future and is short an equal number of calls.

Money received in an account. When a spread is done "at a credit", the dollars from the options sold are greater than the cost of the options purchased.

Money expended from an account. A debit spread requires an outlay of dollars to establish.

The amount by which an option's price will change if the underlying security moves one point in price. See also 'position delta'.

The exercise or assignment of an option before its expiration date. Not allowed for certain options, which are known as European options.

Options which have common stock as their underlying security.

A feature of some options which means that they are only allowed to be exercised at expiration, but not before. Therefore, there can be no early assignment of a European option. Many index options have this feature.

To invoke the holder's right to buy stock (calls) or sell stock (puts).

A mathematical estimate of the return that can be made from a position. It is technically the return which an investor might expect to make if he were to make exactly the same investment many times throughout history. If one consistently invests in positions with high expected returns, he should, on average, outperform those who don't.

The date on which an option contract becomes void. For equity and index options, it is the Saturday after the third Friday of the expiration month. For futures options, each one is different. However, most commodity-based futures options expire in the month before the future expires.

A term used to describe the theoretical worth of an option or futures contract; determined generally by a mathematical model, with volatility sometimes being a subjective variable.

Options which have futures contracts as their underlying security.

The amount by which the delta will change when the underlying stock moves by one point. See delta.

A measure of the volatility of the underlying stock or futures contract, determined by using historical price data.

A measure of the volatility of the underlying stock or futures contract. It is determined by using prices currently existing in the market at the time, rather than using historical data price changes.

A future or option whose underlying entity is an index. Most index futures and options are cash-based, meaning they settle for cash at their expiration, rather than for shares of the index itself.

A spread involving contracts on two different markets, generally referring to futures contracts. For example, one might be long Deutschmark futures and short Yen futures as a hedge.

The investment required by a brokerage firm. Long options must be paid for in full. Futures contracts and naked options are margined. In this sense, one is not borrowing money from the broker. Rather the margin is a deposit of collateral against potential losses from the position.

An average of closing prices over a specific time period, which could be hourly, daily, weekly, or even monthly. A 200-day moving average of a stock price is sometimes considered to be significant support or resistance.

A written option is considered to be naked, or uncovered, if the investor does not have an offsetting position in the underlying stock or futures. See covered option.

A trade which adds to the net position of an investor; an opening buy adds more long options or futures, while an opening sell adds more short stock or futures.

The net total of outstanding open futures or options contracts that have been purchased. Note that for every opening buy, there is an opening sell as well, but the open interest only counts one side, not both.

A graphical representation of the profit potential of a position. Usually, the stock or future price is plotted on the horizontal axis, while the dollars of profit or loss are plotted on the vertical axis. Results may be plotted at any point in time. Generally, in The Option Strategist, profit graphs will show results projected two weeks hence, as well as projected results at expiration of the nearest-term option in the position.

A measure of the exposure of an entire option position to market movement. It is computed by summing the following for every option in the position quantity × delta × shares per option.

another word for price, when speaking of an option.

A measure of option trading volume that is sometimes used as a contrarian technical indicator to predict forthcoming market movements. The ratio is computed by dividing trading volume of puts by the trading volume of calls. It may be used in a specific case, such as options on gold futures, for example. It may also be used in a broader sense by dividing the total volume of all puts trading on equities on all exchanges by all calls traded. If the ratio gets too high, that indicates too many people are buying puts. Since this is a contrarian indicator, that would be a buy signal. Conversely, if too many calls are being bought, the ratio will be too low, and that is generally a sell signal.

A spread in which the number of options sold is larger than the number purchased. Hence the strategy involves naked options. See also backspread.

A term in technical analysis indicating a price area higher that the current stock price where an abundance of supply exists. Therefore the stock or future may have trouble rising through the resistance price.

To close an option and re-establish a similar position in another option on the same underlying security. To roll a long call, one would sell the call he owns, and buy another call, generally with either a higher strike or a longer time to expiration, or both.

A term referring to volatilities of options at different striking prices on the same underlying security. If the implied volatilities are different at each strike, there is said to be volatility skewing.

For options, any option position having both long options and short options of the same type (put or call) on the same underlying stock or futures contract. For futures, any position involving both long and short futures either with different months on the same commodity, or on two related commodities.

A term in technical analysis indicating a price area lower than the current price of the stock or future, where demand is thought to exist. Thus a stock or futures contract would stop declining when it reached a support area.

The price of an option or spread as computed by a mathematical model. See also fair value.

A broad term used to denote the stock, index, or futures contract which underlies a particular series of options.

A term to describe the amount by which an option's price will change for a 1 percent change in the volatility of the underlying security.

A measure of the amount by which an underlying security is expected to fluctuate in a given period of time. See also skewing.

To sell an option. The investor who sells is called the writer. 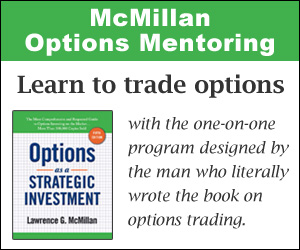 Performance Results: Past performance results for advisory services and educational products are shown for illustration and example only, and are hypothetical.

HYPOTHETICAL PERFORMANCE RESULTS HAVE MANY INHERENT LIMITATIONS, SOME OF WHICH ARE DESCRIBED BELOW. NO REPRESENTATION IS BEING MADE THAT ANY ACCOUNT WILL OR IS LIKELY TO ACHIEVE PROFITS OR LOSSES SIMILAR TO THOSE SHOWN. IN FACT, THERE ARE FREQUENTLY SHARP DIFFERENCES BETWEEN HYPOTHETICAL PERFORMANCE RESULTS AND THE ACTUAL RESULTS SUBSEQUENTLY ACHIEVED BY ANY PARTICULAR TRADING PROGRAM.

ONE OF THE LIMITATIONS OF HYPOTHETICAL PERFORMANCE RESULTS IS THAT THEY ARE GENERALLY PREPARED WITH THE BENEFIT OF HINDSIGHT. IN ADDITION, HYPOTHETICAL TRADING DOES NOT INVOLVE FINANCIAL RISK, AND NO HYPOTHETICAL TRADING RECORD CAN COMPLETELY ACCOUNT FOR THE IMPACT OF FINANCIAL RISK IN ACTUAL TRADING. FOR EXAMPLE, THE ABILITY TO WITHSTAND LOSSES OR TO ADHERE TO A PARTICULAR TRADING PROGRAM IN SPITE OF TRADING LOSSES ARE MATERIAL POINTS WHICH CAN ALSO ADVERSELY AFFECT ACTUAL TRADING RESULTS. THERE ARE NUMEROUS OTHER FACTORS RELATED TO THE MARKETS IN GENERAL OR TO THE IMPLEMENTATION OF ANY SPECIFIC TRADING PROGRAM WHICH CANNOT BE FULLY ACCOUNTED FOR IN THE PREPARATION OF HYPOTHETICAL PERFORMANCE RESULTS AND ALL OF WHICH CAN ADVERSELY AFFECT ACTUAL TRADING RESULTS.