This article was originally published in The Option Strategist Newsletter Volume 7, No. 2 on January 22, 1998.

From questions that subscribers have asked, and from conversations with other option professionals, it seems that there is a rather large contingent of stock owners who own stocks that are now at losses, and they want to know if options can help them out at this point. So, this article will discuss a simple strategy that can be used for these purposes – the stock “repair” strategy of placing a call spread on top of a long stock position.

This is a strategy that can be used to lower the breakeven point for a stock holder, although it does limit his profits while the option position is in place. For the purposes of this example, we’ll use Three-Com stock (symbol: COMS) because its actual, current option prices fit nicely into the theory.

Suppose that a trader initially bought shares of COMS at 38 in late November – expecting it had reached a bottom. However, the stock has not performed well and is bouncing back and forth in a trading range below where the initial purchase was made. At the current time, the following prices exist:
COMS common stock: 32-1/2
April 30 call: 5
April 35 call: 2-1/2
By using this “repair” strategy, the stock owner can lower his eventual breakeven price from 38 to 34, although by doing so he “caps” his profits until April option expiration.
The “repair” strategy is established by adding a ratio call spread to an existing long stock position. If the call spread is established for even money or a credit, there will be no additional downside risk (except for commissions). This supposes that the stock owner wants to hold the stock through April expiration. We will take a detailed look at how one might use this strategy, and what hindrances and benefits it entails.

Here’s how the strategy works:
the stock position is retained, and
1) an equal number of April 30 calls is purchased and 2) twice as many April 35 calls are sold.
For simplicity purposes, let’s suppose that 100 shares of COMS were initially bought at 38. If the “repair” strategy is to be used, then one April 30 call would be bought (for 5 points) and two April 35 calls would be sold (also bringing in 5 points). Since the option spread doesn’t involve a debit, except for commissions, then the spread does not increase downside risk. Also, upside gains are limited, but there are not any naked options in this spread since half of the options sold is covered by stock and the other half is covered by the long options in the spread.

To see the profitability, consider the following table, which uses the above option prices and a stock price of 38 for purposes computing profits or losses at April expiration:

The graph below shows w h a t t h e profitability of the call spread is, by itself. The call spread has its best profitability near the stock price of 35 at expiration. So now, if this profitability is combined with the profit-ability of owning 100 shares of stock at a cost of 38, we get the figures shown in the right-hand column of the previous table. 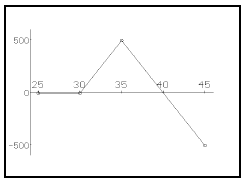 Thus, using the figures from the previous example, the high strike is 35 and the low strike is 30 (i.e., we are considering using the April 35's and the April 30's in our repair strategy spread), and the spread was established for no debit or credit. So, 2 × 35 – 30 – 0 = 40, which is the crossover point and agrees with the above graph.

Another thing that you should consider before using the repair strategy is whether or not you lock the position into a loss by using it. In the previous example, if COMS rallies, at least $200 per share can be made. But if lower strikes had been used for the ratio spread, or if a stock has fallen too far before you decide to try the repair strategy, you may not be able to make a profit at any price prior to expiration. I’m not saying that you should never lock a position into a loss, because if the repair strategy is used and the stock finishes near the higher strike in the repair spread at expiration, the breakeven point of the stock is lowered. Moreover, you are only locked into the loss until the options expire. Once they are removed, you once again own plain old common stock

Also, it should be noted that one has to hold the position through April expiration in order for the results to conform to the above profit graph. If the spread is removed prior to April expiration – even if the stock is near the high strike in the spread (35 for COMS in the previous example) – the repair strategy will not have provided nearly the profits that will accrue at expiration itself.

This article was originally published in The Option Strategist Newsletter Volume 7, No. 2 on January 22, 1998.