This article was originally published in The Option Strategist Newsletter Volume 1, No. 4 on February 13, 1992.

LEAPS is an acronym for Long-term Equity AnticiPation Securities. This is a wordy name for "long-term option". A LEAPS (or is it a LEAP?) is nothing more than a listed call or put option that is issued with two or more years of time remaining. It is therefore a longer-term option than one is used to dealing with. Other than that, there is no material difference between LEAPS and other calls and puts. Strategies involving long-term options are not substantially different from those involving shorter-term options. However, the fact that the option has so much time remaining seems to favor the buyer and be a detriment to the seller. This is one reason why LEAPS have been popular.

Certain facets of LEAPS are the same as for other listed equity options, while others involve slight differences. The amount of standardization is considerably less, which makes the simple process of quoting LEAPS a bit more tedious.

Symbol: Although changes will eventually be made to the way that all options are quoted, the base symbols for LEAPS are currently not the same as the stock symbol. Check with your broker to determine the LEAPS symbol if you need it. Expiration date: When LEAPS were first listed, there were differing expiration months through December, 1993. At the current time, LEAPS are issued to expire in January of each year, so some attempt is being made at standardization.

Striking Price: There is no standardized striking price interval for LEAPS as there is for equity options. If XYZ is a 95 dollar stock, there might be LEAPS with striking prices of 80, 95, and 105, for example.

Terms such as in-the-money, out-of-the-money, intrinsic value, time value premium, and parity all apply and have the same definition. The factors influencing the price of LEAPS are the same as those for any other option: 1) Underlying stock price, 2) striking price, 3) time remaining, 4) volatility, 5) risk-free interest rate, and 6) dividend rate. The relative influence of these factors is more pronounced for LEAPS than it is for shorter-term equity options. Consequently, the trader may think that a LEAPS is overly expensive or cheap by inspection, when in reality it is not. One should be careful in his evaluation of LEAPS until he has observed how their prices relate to the shorter-term equity options with which he is experienced. 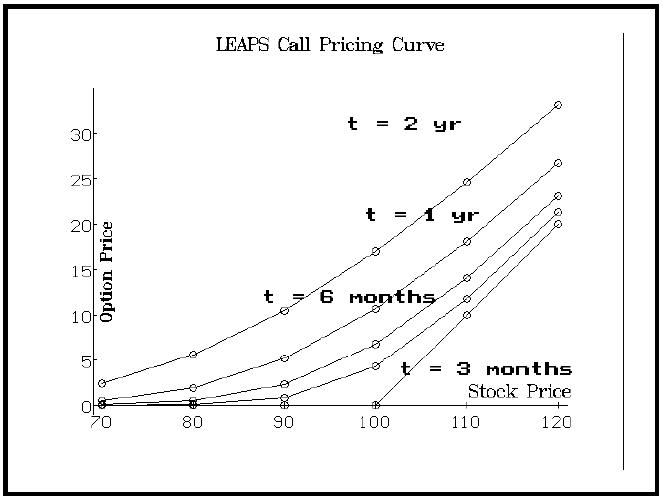 The graph above is the call option pricing curve for three options with similar terms, but differing times remaining until expiration. The most obvious thing to notice about the graphs is that the curve depicting the 2-year LEAPS is quite flat. It has the general shape of the shorter-term curves, but there is so much time value at stock prices even 25% in- or out-of-the-money that the 2-year curve is much flatter than the others. This infers that the delta of a LEAPS call, except for deeply in-the-money ones, is larger and more stable than that of a shorter-term call.

It also demonstrates that the rate of time decay for a LEAPS call is much smaller than that of a shorter-term call. Notice how the shortterm options "hug" the intrinsic value line. This LEAPS call might appear cheap to the casual observer when its price is compared to the near-term calls, but remember that these graphs depict the fair values for this set of input parameters -- none is cheaper or more expensive than the others. Do not be deluded into thinking that a LEAPS option looks cheap merely by comparing its price to a nearer-term option; use a model to evaluate it. Or at least use the output of someone else's model.

For longer-term options such as LEAPS, the cumulative effect of an interest rate or dividend payout over such a long period of time can have a magnified effect on the price of the option. Consider the graph below. This again is the option pricing curve, but the only option depicted is a 2-year LEAPS. The three curves represent option prices for risk-free interest rates of 3%, 6%, and 9%. All other factors (time to expiration, volatility, dividends) are fixed. The difference between option prices caused merely by a shift in rates of 3% is very large. 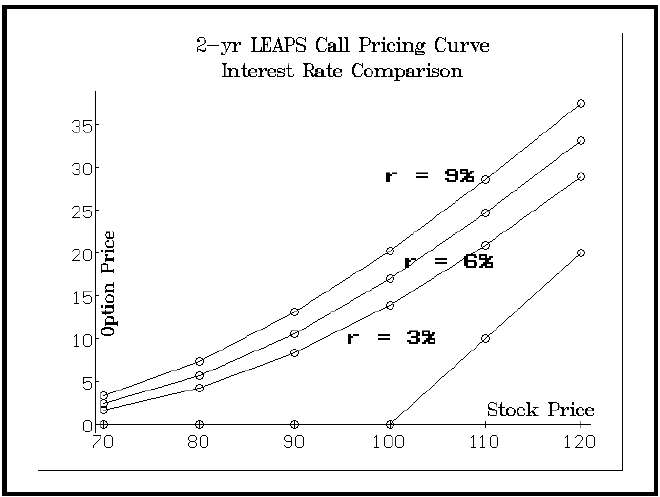 The difference in LEAPS prices caused by rate changes increases as the LEAPS become in-the-money. Graphically, this means the curves get farther apart as one scans them from left to right. The price difference for out-of-the-money LEAPS is large enough -- nearly a point even for options fairly far out-of-the-money (that is, the points on the left-hand side of the graph). A shift of 3% in rates entails a larger price difference of over 2 points in the at-the-money, two-year LEAPS. The largest differential in option prices occurs in-the-money! This may seem somewhat illogical, but it is true. The in-the-money, two-year LEAPS calls (right side of graph) are changed in price by over four points when rates change by 3%. That is a huge differential and should cause any trader who is considering trading in-the-money LEAPS to consider what his outlook is for short-term interest rates. One should be very careful when deciding LEAPS are "cheap" or "expensive" because, conventionally, the short-term interest rate is not usually considered as a significant factor in making such an analysis. For LEAPS, however, the graph is obvious proof that interest rate considerations are important for LEAPS traders. With short-term rates currently being low (they can't go negative, can they?), this pricing factor is leaning in favor of the LEAPS option buyer.

Now consider dividends. An increase in dividends manifests itself by decreasing the LEAPS call price. The reason that this is true, of course, is that the stock will be reduced in price more when it goes ex-dividend by the larger amounts of the increased dividends. An annual dividend increase of $1 by the underlying common stock will have a profound effect on 2-year LEAPS calls. A call that is 25% in-the-money will decrease in price by about $1.60 when such an increase is announced; a call that is 25% out-of-the-money will only lose about 70 cents of value for the same dividend increase. Another way to think of this is that if two different stocks have equal volatility, price, etc., then the one with the higher dividend payout will have cheaper LEAPS calls. Finally, note that dividend increases have the opposite effect on puts. That is, an increase in the dividend payout of the underlying common will cause a put to increase in price. If the put is a long-term LEAPS put then the effect of the increase will be even larger.

The speculative buying of LEAPS is best done when interest rates and implied volatilities are relatively low. Even if one is wrong about the stock's timing or movement, he may be "bailed out" to some extent if rates rise or the stock becomes more volatile. Of course, if rates and/or volatilities decline, the LEAPS option buyer will be hurt.

Don't always pay for the extra time if you don't need it. One possible disadvantage to buying LEAPS is that one is paying for so much time value premium. The tradeoff is that one's timing of the option purchase does not have to be as precise since time will be kind to him. Translating this concept into actual practice generally means that if the speculative option buyer is fairly certain of his timing, he should buy short-term options; if not, he should buy longer-term options. So if one spots a technical breakout on a chart, he should feel certain of his timing and buy a short-term call; he is not expecting to have to hold the call for a long time before the stock moves. The stock should move right away or the breakout would have to be considered false. Conversely, if he is buying the call because he expects the company's fundamentals to be good in the future and wants some leverage if they are, he should consider buying LEAPS because the timing of the translation of "good fundamentals" into a rising stock price is uncertain at best.

There are many more aspects of LEAPS that will be discussed in future issues -- particularly, how they fit into specific strategies. For example, the "bullish" strategy of buying an at- or in-the-money LEAPS call and simultaneously selling an out-of-the-money short-term call against it might not perform as well as one expects, especially if the underlying stock rises very quickly. Another nonobvious fact: early exercise is a possible problem for the LEAPS seller; if the underlying stock pays a relatively large dividend and the written LEAPS call is in-the-money, the call may be subject to early assignment even if there is over a year of life remaining in the option.

This article was originally published in The Option Strategist Newsletter Volume 1, No. 4 on February 13, 1992.