This article was originally published in The Option Strategist Newsletter Volume 21, No. 22 on November 30, 2012.

We often trade the first day of the month, since we have done a considerable amount of research on the subject.

The total $SPX gain (buy and hold) over that time is 1090 points, so the first day of the month accounts for almost 57% of the total gains over that time. 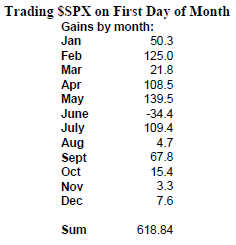 You can see that not every month is the same, or even close to being the same. The best profits seem to come in February, April, May, and July. The only losing month is June. However, the later months of the year are not particularly good, with October, November, and December each contributing only small amounts to the overall total.

Therefore we are not going to trade this system for the month of December, even though we have buy signals in place from other systems. We already have plenty of long positions because of those other buy signals, and there is every reason to believe they will adequately carry the load if a strong rally gets underway.

We will likely be trading this system for at least four of the next five months (March is in doubt), for those are some of the better months annually.

This article was originally published in The Option Strategist Newsletter Volume 21, No. 22 on November 30, 2012.