The Distribution of Stock Prices (09:08)

This article was originally published in The Option Strategist Newsletter Volume 9, No. 8 on April 27, 2000.

Since 1987, the huge volatility that stocks have exhibited – especially on certain explosive down days such as the Crash of ‘87 or the mini-crash of April 14th (a couple of weeks ago) – has alerted more people to the fact that something is probably amiss in their usual assumptions about the way that stocks move. The lognormal distribution “says” that a stock really can’t move farther than three standard deviations (whether it’s in a day, a week, or a year). Actual stock price movements make a mockery of these assumption, as stocks routinely move 4, 5, or even 10 standard deviations in a day (not all stocks, mind you, but some – way more than the lognormal distribution would allow for). Longtime subscribers of The Option Strategist know these facts, of course, since we have pointed them out in detail in several past articles – most notably Vol. 8, Nos. 7 and 23).

We have long been telling you – our customers – that option selling is a dangerous strategy (covered or not) because of the possibilities of huge stock price movements. The odds lie with the buyer of options, especially if those options are underpriced when purchased. The reason is that these outrageous moves (which are more prevalent in stocks than in indices or futures) can destroy a naked option writer, but can be of great benefit to an option buyer.

In order to further quantify these thoughts, computer programs were written to analyze our database of stock prices, going back over six years. As it turns out – and as you will see – that is a short period of time as far as the stock market is concerned. While it is certainly a long enough time to provide meaningful analysis (there are over 2.5 million individual stock “trading days” in that data base), it is a biased period in that the market has been going up for most of that time. However, somewhat surprisingly, there were more extreme downside moves than upside moves.

At first glance, it appears that the two curves have almost identical shapes. Upon closer inspection, however, it is clear that they do not, and in fact some rather startling differences are evident.

The graph below shows the “fat tails” quite clearly; both have been “zoomed in” on to show you the stark differences between the theoretical (“normal”) distribution and actual stock price movements. Consider the downside (the lower left circled graph on page 3). First, note that both the “actual” and “normal” graphs lift up at the end – the leftmost point. This is because the graph was terminated at –4.0 standard deviations, and all moves that were greater than that were accumulated and graphed as the leftmost data point. You can see that the “normal” distribution expects fewer than 200 moves out of 2.5 million to be of –4.0 standard deviations or more (yes, the “normal” distribution does allow for moves greater than 3 standard deviations – they just aren’t very probable). On the other hand, actual stock prices – even during the bull market that has been occurring during the term of the data in this study – fell more than –4.0 standard deviations nearly 2500 times out of 2.5 million. Thus, in reality, there is really more than 12 times the chance (2500 vs. 200) that stocks will suffer a severely dramatic fall, when comparing actual vs. theoretical distribution. Also, notice in that lower left circle, that the actual distribution is greater than the normal distribution all along the graph. 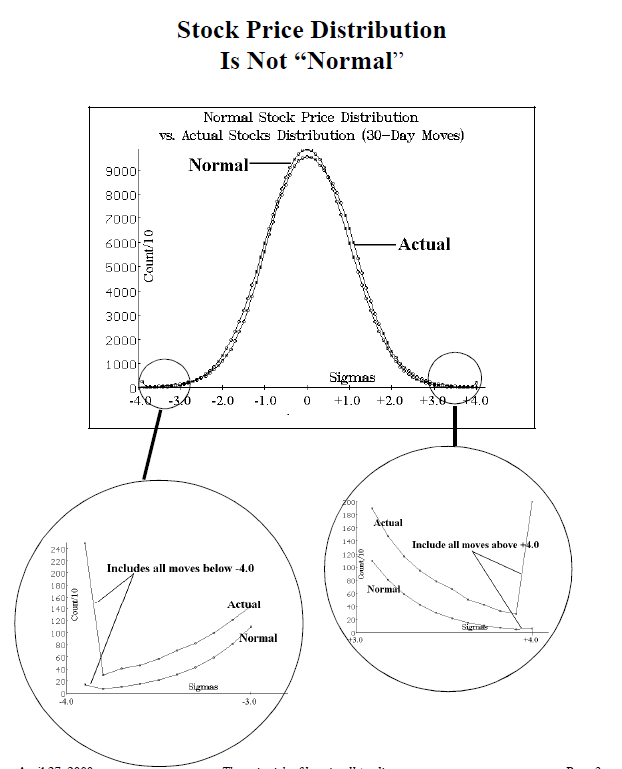 My “gut” reaction is that our data reflected an overly bullish period. That is, actual stock prices rose farther than they were expected to – not necessarily at the tails – but in the intermediate ranges, say between +0.5 and +1.5 standard deviations. This does not change the results of the study as far as the “tails” go, but one may not always be able to count on intermediate upside moves being more frequent than predicted.
“Side Benefits” of This Study In the course of doing these analyses, a lot of computer power was “burned”. Unfortunately our computers are PC’s and not those designed by Seymour Cray or Gene Amdahl (for those of you not familiar with those names, they are generally recognized to be among the premier original designers of the largest super-computers). So one pass through the data base takes about three hours. Thus, we tried to make it “count” as much as possible and accordingly a lot of smaller distributions were saved when they were calculated.

One of these is the distribution on any individual trading day that was involved in the study. Now, one must understand that one day’s trading only yields about 3000 data points (there are about 3000 stocks in our data base), so the resulting curve is not going to be as smooth as the ones shown on page 3. Nevertheless, some days could be interesting: for example, the day of the mini-crash, Friday, April 14th, 2000. The distribution graph is shown below. 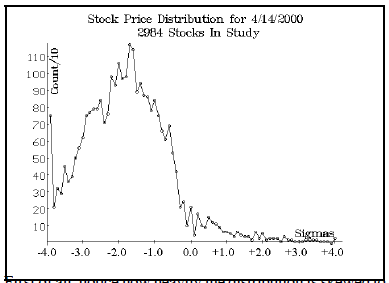 First of all, notice how heavily the distribution is skewed to the left; that agrees with one’s intuition that the distribution should be on the left when there is such a serious down day as 4/14/2000. Also, notice that the last data point – representing all moves of –4.0 standard deviations and lower – shows that about 750 out of the 2984 stocks (see 2nd line of graph title) had moves of that size! That is unbelievable and it really points out just how dangerous naked puts and long stock on margin can be on days like this. No probability calculator is going to give much likelihood to a day like this occurring, but it did occur and it benefitted those holding long puts greatly, while it decimated others. 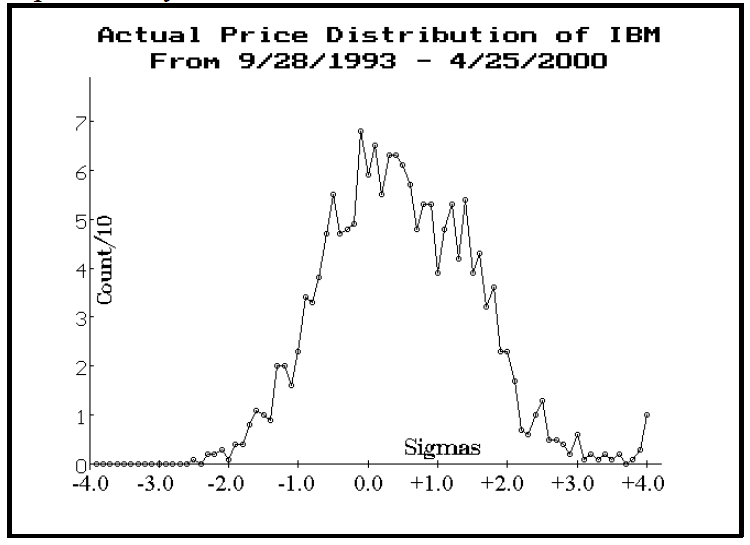 This graph perhaps shows even more starkly how the bull market has affected things over the last six-plus years. There were over 1600 data points for IBM (i.e., daily readings), yet the whole distribution is skewed to the right. It apparently has been able to move up quite easily throughout this time period. In fact, the worst move that occurred was one move of –2.5 standard deviations, while there were about ten moves of +4.0 standard deviations or more. Consider the longer-term distribution of IBM prices, going all the way back to March, 1987: It’s clear that this longer-term distribution conforms more closely to the normal distribution – in that it has a sort of symmetrical look, as opposed to the previous graph above, which is clearly biased to the right (upside). These two graphs have implications for the “big picture” study, shown on page 3. Our database for most stocks only goes back to 1993 (IBM is one of the exceptions), but if the broad study of all stocks were run using data all the way back to 1987, it is certain that the “actual” price distribution would be more evenly centered – as opposed to its justification to the right (upside). That’s because there would be more bearish periods in the longer study (1987, 1989, and 1990 all had some rather nasty periods). Still, this doesn’t detract from the basic premise that stocks can move farther than the normal distribution would indicate.

What This Means For Option Traders

The most obvious thing that an option trader can learn from these distributions and studies is that buying options is probably a lot more feasible than conventional wisdom would have you believe. The old thinking that selling an option is “best” because it wastes away every day is false. In reality, when you have sold an option, you are exposed to adverse price movements and adverse movements in implied volatility all during the life of the option. The likelihood of those occurring is great, and they generally have more influence on the price of the option in the short run than does time decay.

Another thought that comes to mind is that we could provide several different kinds of distributions – including even individual stock distributions – in future versions of our Probability Calculator 2000. You could select the normal distribution, or one with fat tails, or one with a bullish bias (if you expected continued bullish markets, such as we have seen in the past six years) and so forth. The possibilities are large.

I have some qualms about using the past distribution as a forward projection for an individual stock, because it could easily change. That is, there are so few data points (comparatively speaking) in only one stock’s distribution, that they might not really be representative of what could happen in the future. Nevertheless, it might provide an additional piece of input for a trader before a position is established, as long as it is not accepted as “gospel”.

You might ask, “but doesn’t all this recent volatility just distort the figures – making the big moves more likely than they ever were, and ever will be again?” The answer to that is a resounding, “NO!” The reason is that the current 20-day historic volatility is used on each day of the study in order to determine how many standard deviations each stock moved. So, right now, that is a high number and it therefore means that the stock would have to move a really long way to move 4 standard deviations. Back in 1993, however, when the market was in the doldrums, historic volatility was low and so a much smaller move was needed to register a 4–standard deviation move.

To see a specific example of how this works in actual practice, look carefully at the lower chart of IBM on page 4 – the one that encompasses the crash of ‘87. Don’t you think it’s a little strange that the chart doesn’t show any moves of greater than –4.0 standard deviations? The reason is that IBM’s historic volatility had already increased so much in the days preceding the crash day itself, that when IBM fell on the day of the crash, its move was less than –4.0 standard deviations (actually, its oneday move was greater than –4 standard deviations, but the 30-day move – which is what the graphs on page 3 depict – was not).

It is important that option traders, above all people, understand the risks of making too conservative of an estimate of stock price movement. These risks are especially great for the writer of an option (and that includes covered writers and spreaders, who may be giving away too much upside by writing a call against long stock or long calls). By quantifying past stock price movements, as we have done in this article, hopefully you are convinced that “conventional” assumptions are not good enough for your analyses. This doesn’t mean that it’s okay to buy overpriced options just because stocks can make large move with a greater frequency than most option models predict, but it certainly means that the buyer of underpriced options stands to benefit in a couple of ways. Conversely, an option seller must certainly concentrate his efforts where options are expensive, and even then should be acutely aware that he may experience larger-than-expected stock price movements while the option position is in place.

This article was originally published in The Option Strategist Newsletter Volume 9, No. 8 on April 27, 2000.