This article was originally published in The Option Strategist Newsletter Volume 18, No. 9 on May 14, 2009.

One strategy that we have employed with a good deal of success during the high-volatility environment that has evolved since the summer of 2007 is the hedged $VIX/SPY trade (we’ll review it in a moment). But, does it produce better results than merely buying SPY straddles, say? How does it compare to owning $VIX option straddles? While there are similarities between the hedged strategy and straddle buying, there are distinct differences as well. In this article we’ll examine the various strategies and attempt to reach a conclusion that answers the question of which is best. Also, since $VIX doesn’t exactly track SPY inversely, we’ll try to factor that information in as well.

Everyone should be familiar with straddle buying0 – the simultaneous purchase of both a put and call with the same terms (same striking price and expiration date). The strategy is quite simple – a fixed cost is paid for the straddle, and that is the most that the straddle buyer can lose. However, the probability of losing the entire amount is very, very small, since the underlying would have to close exactly at the striking price at the expiration date of the options in order to invoke the maximum loss. 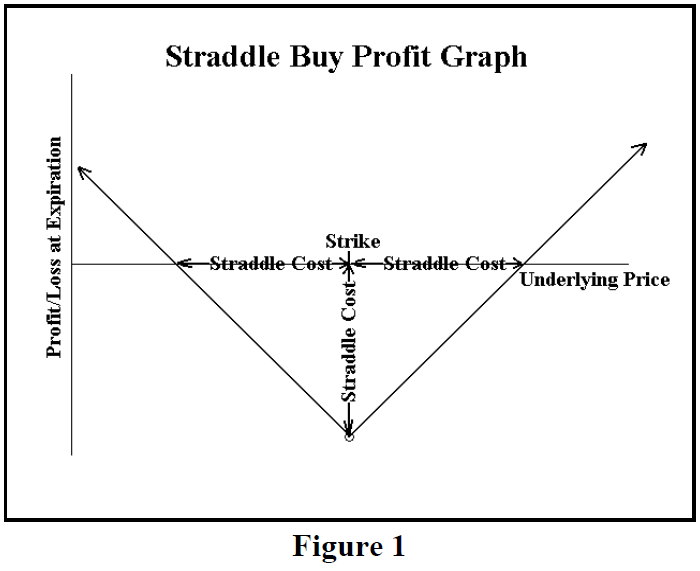 Meanwhile, profit potential is large, for if the underlying moves away from the strike by an amount greater than the price paid for the straddle, profits will result. If the underlying moves a great deal away from the strike, very large profits could ensue. Figure 1 summarizes the general profitability – at option expiration – of owning a straddle.

As far as the broad market is concerned, one could buy straddles on $SPX, $OEX, $DJX – or the associated ETF’s, such as SPY or DIA. In some cases, $NDX and QQQQ straddles might be used as well.

In general, index options are slightly overpriced. This is a well-documented fact, in that the implied volatility of index options, on average, turns out to be slightly higher than the resulting actual (statistical) volatility of the index itself over the ensuing life of the option. Hence, unless there is an expansion in volatility during the life of the options in the straddle, it is generally difficult for the straddle buyer to make money.

Of course, that doesn’t mean that the straddle buyer can’t ever make money. For example, even as late as last September 12, 2008, these prices existed:

An alternative to a move in the broad market might be a move in volatility. The CBOE’s Volatility Index ($VIX) could also be used as a market proxy in many cases. Hence, the purchase of a straddle on $VIX might be profitable as well, if the market makes a big move. For example, with $VIX at 25.66 last year on September 12th, the $VIX Oct 25 straddle cost 4.25.

Eventually, the $VIX Oct futures (which are, in effect, the underlying instrument of the $VIX October options) moved as high as 69.40, before settling at 52.79 at October expiration. Those are moves of 44.40 and 27.79 above the strike, respectively – vastly greater than the 4.25 cost of the straddle.

So, it is possible for straddle buying on the major indices to be profitable (although in most normal expirations, it is probably not). Assuming that option traders, collectively, are “smart” enough to price straddles accurately, there is no real “edge” in buying a straddle. Its best outcome results from the fact that certain traders might occasionally have a different view of the forthcoming volatility of the market. If one buys a straddle on either $SPX or $VIX and volatility then explodes, the straddle buyer will profit. His profits don’t result from an “edge,” per se, but in a misperception of volatility by the option-trading public (not necessarily a “black swan” event, but those would certainly qualify).

As we have studied $VIX and its derivatives, and their relationship to the broad market over the past three years, we have observed many useful relationships. One, of course, is the fact that $VIX futures and $VIX will eventually converge upon each other by expiration day – for that is the definition of the $VIX futures contract.

To trade this, one could merely take a directional position in the $VIX options. For example, last October we saw situations such as this:

This situation has the Oct futures trading at a huge discount to $VIX of 14.69 points with just 17 calendar days remaining. At the end of that time, if not before, $VIX and the Oct futures price will converge. The simple strategy would be to buy $VIX Oct 35 or Oct 37.5 calls – hoping that $VIX remains stable and the futures move towards it. Actually, that would have worked very well in this particular case, as the futures settled at 63.03 at expiration. But, $VIX could have fallen to meet the Oct futures, for the futures are often a better predictor of forward volatility than $VIX is. In that case, the futures would have settled near 37, and the calls would have lost money.

In the above example, we bought $VIX calls. The offsetting position in SPY would be to buy SPY calls. At first, it seems illogical to own calls on both, but when one realizes that $VIX and SPY typically move in opposite directions, then the hedge makes sense.

Returning to the same example, we can add the SPY information:

Thus, the hedged position would be:

Moreover, as we have shown in the past, the quantities of SPY and $VIX options should not normally equal each other in the hedge. Rather, one typically buys more $VIX calls than SPY calls, in order to balance the volatility and the price of the underlyings. At that point in time (October 2008), the proper ratio was slightly less than 2 $VIX calls for each SPY calls – perhaps a ratio of 5-to-3. That makes the ensuing profit even larger.

Of course, the above example involved one of the largest $VIX futures discounts in history. In a more routine situation, $VIX might only differ from the futures by 2 points or so. Even then, the position makes sense, since there is an “edge” in the position.

The Hedge Without An “Edge”

Can this hedged strategy be used when there is no “edge” in the position – that is, when the futures are trading at more or less the same price as $VIX? Of course it can, but it might not be optimal.

Consider today’s market: $SPX has rallied 270 points since the March lows. $VIX has fallen from the high 50's to the low 30's on this move. If one were still bullish, he might establish this position: buy $VIX puts, figuring that $VIX will continue to decline if the market rally persists, but also buy SPY puts just in case the rally comes undone and the market collapses. That strategy makes a certain amount of logical sense even though there is currently no “edge” in the form of a significant $VIX futures premium or discount.

So, is this form of the hedge any different from buying a straddle on SPY? If one buys SPY puts and SPY calls, he will make money on the calls if the rally continues and would make money on the puts if the market declines. Of course, SPY would have to move far enough – not just a minimal amount – for the straddle to profit. A June SPY at-the-money straddle costs about 8.20 at current prices.

So, which is better today – the $VIX/SPY hedge or the long SPY straddle? In my mind, the hedge is better, for even if the market goes only modestly higher, $VIX could continue to decline rather quickly. Furthermore, a decline in $VIX would hurt the SPY straddle price tremendously – another reason to favor the hedge over the straddle.

What about buying straddles on $VIX, as opposed to either the $VIX/SPY hedge or the outright SPY straddle? If we were to do that, we’d buy the near-term, June straddles, for the June futures are the most responsive to changes in $VIX. That straddle costs a little more than 6.50. Can the $VIX futures move 6.50 points in a month? Certainly. So this isn’t a bad alternative.

We’re fairly certain that $VIX could drop another 6 points or more in a continuing $SPX rally. Can it rise by that much if $SPX declines? Probably only if $SPX declines sharply and swiftly. Unfortunately, rallies in $VIX have been modest in recent months.

And, is this better than the $VIX/SPY hedge? Again, I think not. The problem is not with owning the $VIX puts. The problem area – as noted above – is what happens if $SPX declines at a modest pace. We know SPY puts will make some money in that case, but we can’t be sure that $VIX calls will.

There is no absolute relationship between $VIX and SPY; thus, we cannot always tell how the hedge will behave. That’s something we don’t have to worry about in the case of either of the straddle-buying strategies ($VIX or SPY). However, since the hedged strategy can be constructed with either puts or calls, one has two choices of how to implement the hedge. With some thought, one can usually be on the “right” side. Today, that means owning $VIX puts hedged by SPY puts – not using the calls.

If the market were to decline, we can’t rely on the fact that $VIX will rally sharply. It did not experience much of a rally during the rather large 270-point $SPX drop from early January to early March. Why? Because the decline was orderly, and $SPX actual volatility was somewhat subdued because of the rather orderly broad market decline. $VIX doesn’t often venture too far from the 20-day historical volatility of $SPX, and thus it too was rather subdued. Even last fall, $VIX stayed in the general neighborhood of the 20-day historical volatility of $SPX, which actually rose to a previously-unheard-of level above 80%.

This article was originally published in The Option Strategist Newsletter Volume 18, No. 9 on May 14, 2009.