This article was originally published in The Option Strategist Newsletter Volume 8, No. 19 on October 14, 1999.

There is a seasonal strategy that we use each year, and the time is drawing nigh to implement it once again. The strategy is a simple one, and it is this: buy the S&P 500 Index at the close of trading on October 27th of any year (or on the preceding Friday if Oct 27th falls on a weekend). Sell your purchase at the close of trading on November 2nd (or on the following Monday if Nov 2nd falls on a weekend). This year, both of those days are days on which the market is open.

The results for the past 21 years are presented in the table on the right. As you can see, this simple system has a very good track record: a profit in every year except 1983 (which was a push). In fact, the last two years have produced the biggest profits to date that the system has seen. However, what fueled those larger-than-average advances was the fact that the market had taken a heavy blow earlier in October in each year (1997 was the Victor Niederhoffer violent selloff, including a 550-point limitdown Dow day, and 1998 was the Asian crisis, accompanied by the Long-Term Capital trading debacle).

So far, we have not had that type of decline this year, so if the system is fortunate enough to produce a gain again, it will most likely be more in line with the average gain, which is just under 10 S&P points. Still, that’s not a bad short-term trade.

I suppose the underlying reason behind the excellent performance of this seasonal trade is that it reflects the fact that the market usually makes a trading bottom sometime in October – after the September-October decline. Even that, though, doesn’t completely explain the stellar performance of this trade.

To implement the trade, we are going to recommend using at-the-money options, although one could also buy S&P futures or the e-mini futures as well.

If $OEX rises 12 points, sell one of the calls. If it rises another 12 points, sell another call. In any case, liquidate whatever position is remaining at the close of trading on Tuesday, November 2nd. There will not be a stop other than the Nov 2nd exit. 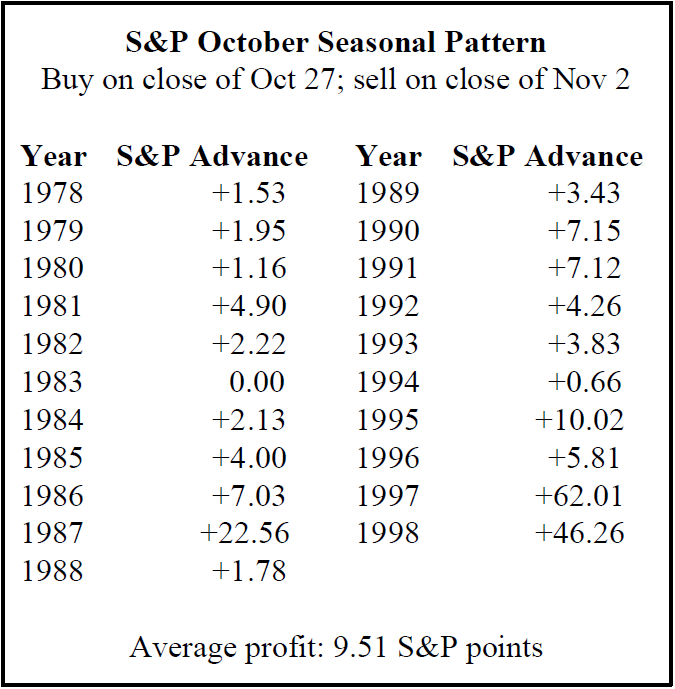 This article was originally published in The Option Strategist Newsletter Volume 8, No. 19 on October 14, 1999.