The Predictive Power of Option Premiums (03:10)

This article was originally published in The Option Strategist Newsletter Volume 3, No. 10 on May 27, 1994.

We have, in the past, often written about the fact that options can be used to help spot "hot" stocks, such as potential takeover candidates. Option premiums tend to inflate and/or option volume tends to increase prior to a major fundamental news event concerning the stock. The reason for this, of course, is that "insiders" — those who have prior knowledge of the news, or at least have a very educated guess — buy options because of the tremendous leverage available from the profitable purchase of an option.

Their option buying is noticeable to the general public as it manifests itself in one of two ways: options become very expensive (that is, they begin trading with an extremely high implied volatility compared to the stock's actual historical volatility), or the high level of option trading activity is conspicuous when one compares it with the "average" level of option trading volume.

As you know, we already monitor the latter category through our Volume Alert Section and, on a more timely basis, through our Daily Volume Alert Fax Service. We have been able to spot many situations in which a quick move in the stock was "predicted" by option trading volume. These stock moves generally are the result of news items: earnings announcements, newspaper articles, new product announcements, and, occasionally, a takeover. Thus, the option volume is a useful tool in spotting many stock trading situations, although they may not all be major ones.

The other category — extremely increased option premium levels — is one that may be more important in spotting larger moves, such as takeovers in particular. This phenomenon may also be accompanied by increased option volume, and often is. This situation, of course, creates expensive options. Professional option traders are not normally wont to buy overpriced options, but in situations like this they may. There is an old tongue-in-cheek saw that proclaims, "the only way to make money by buying options is to buy overpriced ones". While that may sound illogical from a mathematical viewpoint, it is often true from a real-life prospective as the "insiders" who are buying these options are proven right and a takeover or some other important news item is subsequently announced.

A month ago, we highlighted three stocks with extremely high option volume and an even more impressive level of expensive option premium: Syntex(SYN), Gerber(GEB), and Enzo Biochem(ENZ). Since then, two of the three — SYN and GEB — have been taken over, although it took several weeks for the announcements to be made.

Other things that might be important to see would be a rising stock price and a pattern of option activity that is consistent with speculation. That is, we would expect to see heavy activity in the out-of-the-money options and in the near-term options as well. If most of the activity is coming in longer-term options, or in the more expensive in-the-money options, then we are probably not looking at a truly speculative situation.

At the current time, there is one stock in particular that is in this category, American Medical Holdings (symbol:AMI): 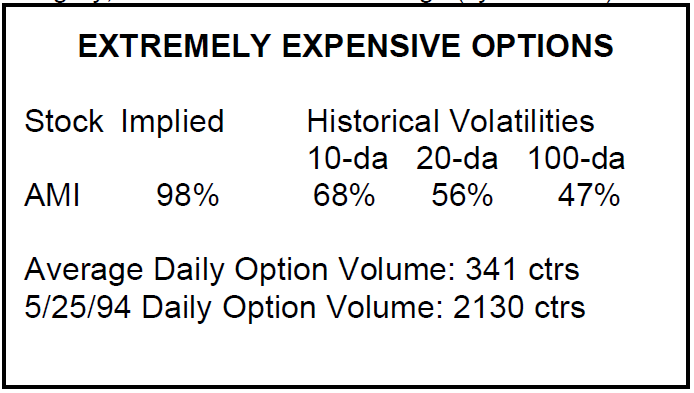 We won't ordinarily include the individual options in this feature, but for today it might be interesting to look at them for AMI, if only to describe how one of these highly speculative situations' options should look. The stock was at 23¼, up 2½, when this "snapshot" was taken.

Notice that most of the trading is in the June series, which is the near-term series. There is then fairly heavy activity in the next, July, series, but almost nothing in the longer-term options. In addition, notice that the Junes have higher implied volatilities than the Julys do, and both June and July exhibit much higher implied volatility than the longer-term September options. These patterns are consistent with takeover speculation.

The stock is up from 19½ to nearly 25 in just 3 days. There have been takeover price estimates ranging from 28 to 35 dollars per share. Of course, it is usually the case that as these "rumor stocks" move higher, the rumored takeover price increases as well.

In the feature article two issues ago, we addressed ways to trade these highly speculative stocks in which there are very expensive options. Obviously, as mentioned above, if we are truly uncovering a takeover situation, then we would want to be long the stock or long calls with only a small amount of time value premium, such as in-the-money calls. We can't abandon our rationality altogether and start buying extremely expensive, out-of-the-money options.

If the options are very expensive, one might be tempted to sell the near-terms. One strategy would be to do covered call writes — selling the expensive near-term calls against stock. Since covered call writing is equivalent to selling naked puts, one could probably better utilize his capital by selling some slightly out-of-the-money puts naked. However, if the rumors prove to be false, the stock might drop quickly, causing a loss for either of these strategies.

A more neutral sale of premium might appeal to strategists. This would especially be true if one thought that the rumors were unreasonable or possibly even false. A call spread with a slight ratio might be one good way to approach it, or the sale of expensive puts, with perhaps the sale of just a few calls might also be a reasonable tactic (this is equivalent to, and may be thought of as, a covered writing position with just a small number of extra calls sold to make it a slight ratio write). This worked well in Gerber, as the May options expired just before the takeover was announced. These strategies can also be advantageous if the rumors don't pan out right away; any time delay may lead to a lessening of option premiums, and to modest declines in the stock price as well (that scenario also occurred in Gerber). However, such strategies have risk — usually both to the upside and the downside — so that may lessen their appeal for many traders.

The choice ultimately lies with the individual trader. If the desire is to play for the takeover, then trading the stock will involve the least time value expense. Of course, if the takeover rumors should come true, you have much more leverage by owning the calls. If the desire is to sell the time value premium, then a call ratio spread is probably best, or a covered write (naked puts) with perhaps a few extra calls sold as well.

Does this analysis work for futures and indices?

I am often asked this question, and I generally feel that the answer is "No". It is impossible to engineer a takeover in an index (or group of stocks) and is nearly impossible to mastermind anything similar in futures (unless, of course, you know Louis and Billy Ray from "Trading Places").

However, there might be related events, such as a major research report being leaked ahead of time that could cause option volume and implied volatility to increase in advance. It is rather common practice for the major brokerage firms to recommend an entire group of stocks, so someone who had advance knowledge of a powerful report might try to buy calls in the sub-index options of that group, assuming that such options exist. In futures, it is much more difficult for one individual report (except the government reports, such as the crop report) to move the market. Besides, the government and major analysts are particularly secretive about their information.

Since the actual level of option premiums may be another important addition to the "puzzle" of stock prices, we will be covering it as a regular feature from now on.

This article was originally published in The Option Strategist Newsletter Volume 3, No. 10 on May 27, 1994.