Is Implied Volatility A Good Predictor of Actual Volatility? (09:02)

This article was originally published in The Option Strategist Newsletter Volume 9, No. 2 on January 27, 2000.

The question posed in the title above is one that should probably be asked more often than it is. Somehow, it has become something of a consensus in the option trading community that implied and historical (actual) volatility will converge. That’s not really true – at least not in the short term. Moreover, even if they do converge, which one was right to begin with – implied or historical? That is, did implied volatility move to get more in line with actual movements of the underlying, or did the stock’s movement speed up or slow down to get in line with implied volatility? In this article, we’ll look at some examples of what really happens with respect to implied and historical volatility, and we’ll try to draw some conclusions regarding this comparison.

A number of charts will be presented in this article, because visual aids can often describe the situation better. Let’s start out with the $OEX Index, because in the past we’ve discussed how its options are routinely overpriced. That is, implied volatility of $OEX options is almost always higher than what actual volatility turns out to be. This has been the subject of a couple of previous articles, one of which instigated some verbal sparring in Barron’s. Nevertheless, the fact remains that $OEX options are mostly overpriced. Consider the following chart: 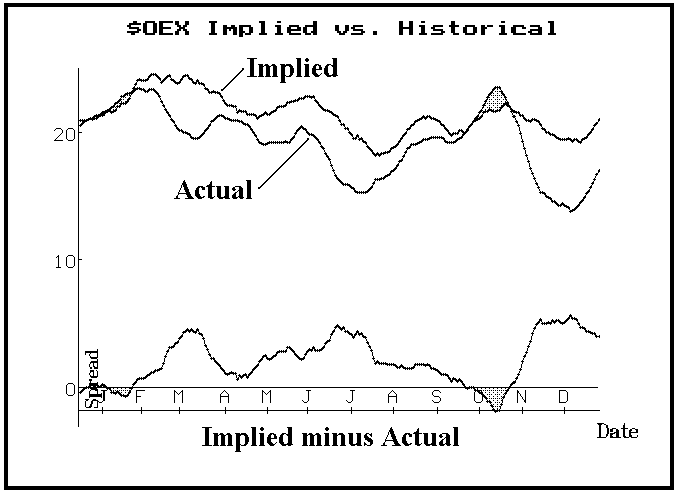 Very few charts are as one-dimensional as the $OEX chart, where the options were so consistently overpriced. Most stocks find the “difference line” oscillating back and forth about the zero mark. Consider the following similar chart for Qualcomm (QCOM), with the stock chart printed below it. 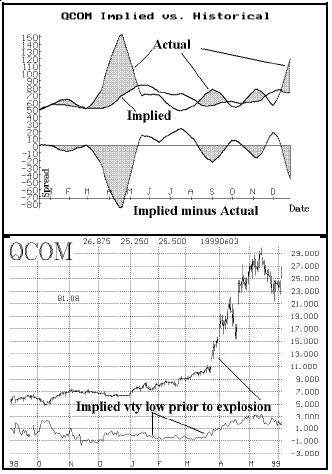 The volatility comparison chart shows several shaded areas – ones in which the stock was more volatile than the options had predicted. Owners of options profited during this time, provided they had a more or less neutral outlook on the stock. The bottom chart shows the stock’s performance in the March-April, 1999, period – the largest shaded area on the chart. Note how implied was quite low before the stock made the strong move from 10 to 30 (split-adjusted) in little more than a month.

Next, a “picture” of a stock on which we successfully own straddles is included – Advanced Radio Telecom (ARTT) (Position E170). In this case, the stock has recently begun to make a strong move, yet implied volatility (which was “too low” to begin with) continues to remain low. Hence, the last shaded area is small but is growing rapidly. 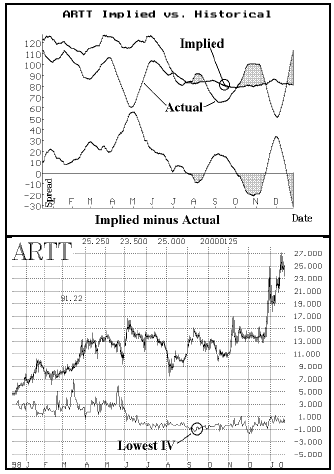 You can also tell something else important from the above charts. The implied volatility of the ARTT options was “too high” during the first half of 1999. Thus, the “difference line” remains above the zero mark for an extended period of time on the top chart, above. The same thing can be seen on the lower chart, which shows that implied volatility was at its highest levels then.

One thing that does stand out on these charts is that implied volatility seems to fluctuate less than actual volatility. That, I believe, is a natural function of the predictive process. We have mentioned similar observations in the past: for example, when the market collapses, implied volatilities of LEAPS options only rise modestly – reacting less than short-term volatilities. In other words, option traders and market makers are predicting volatility when they price options, and one tends to make a prediction that is somewhat “middle of the road”, for an extreme prediction is more likely to be wrong. Of course, it turns out to be wrong anyway, since actual volatility jumps around quite rapidly.

While these charts are an interesting novelty, I don’t think one can use them for any predictive value. In that light, consider one more chart. This one is of Timken Company (TKR). These options are quite cheap and the straddles are an excellent buy -- the best one statistically on the day of this analysis (1/25/2000). Moreover, actual volatility has begun to increase already, so that the chart below shows a rather lengthy shadow area already having been formed. One would think, if these charts had predictive value, that one would want to enter the position just before the shaded area developed (as in the ARTT chart). But since this straddle buy has such excellent probability statistics, one can feel confident that it’s a good buy, despite the fact that the shaded area is already some weeks old. 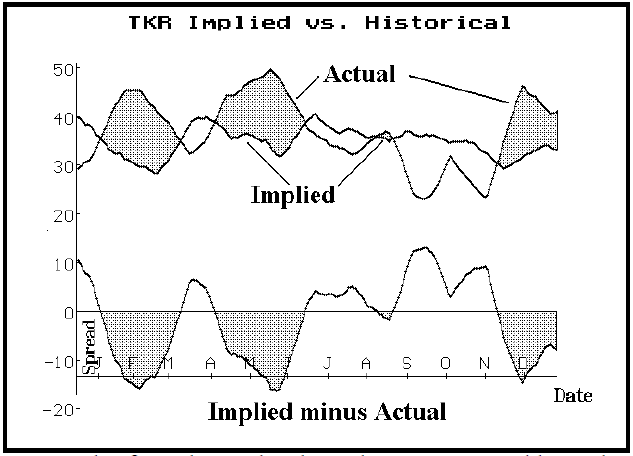 The few charts that have been presented here don’t constitute a rigorous study upon which to draw the conclusion that implied is a poor predictor of actual volatility, but it is my firm opinion that that statement is true. Some graduate student somewhere, looking for a master’s thesis topic, could take it from here.

This article was originally published in The Option Strategist Newsletter Volume 9, No. 2 on January 27, 2000.